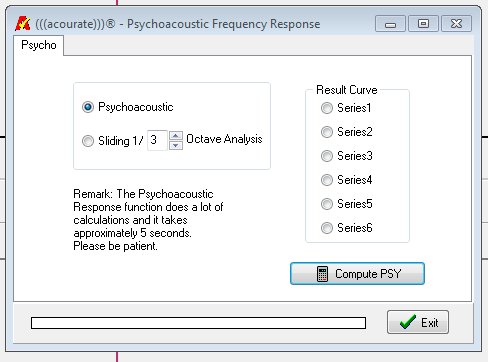 Description:
Psychoacoustics smoothes an impulse response as preparation for a filter calculation using a proprietary technique.


Application:
This function is the first step of Room Macro 1. Instead of using the automatic calculation of macro 1 this function can be applied with further individuall settings Psychoacoustic:
The psychoacoustic smoothing (green) follows the given pulse response (red) pretty well like an envelope curve. A resulting filter can lower the peaks accordingly to achieve the desired frequency response at the listening position. The dips in the frequency response are ignored yo a great extent. This prevents a boost by the correction filter which leads to a good correction at the listening place but also to an overboost at other listening positions.

Sliding Octave Analysis:
The sliding octave analysis (brown) follows the peaks and dips depending on the octave parameter setting. Based on the result it is possible to create a correction filter which linearizes the frequency response more accurately but with the disadvantage of being more position dependent. If there is only a single listening position the octave analysis function can be a good choice (ignoring the risk of bass overboost at other room positions)
There is also the possibility to combine both smoothing methods. So a psychoacoustically smoothed curve for midrange and trable can be combined with a curve, smoothed by a sliding octave analysis for the lower frequency range. See the Acourate function Amplitude SplitNJoin